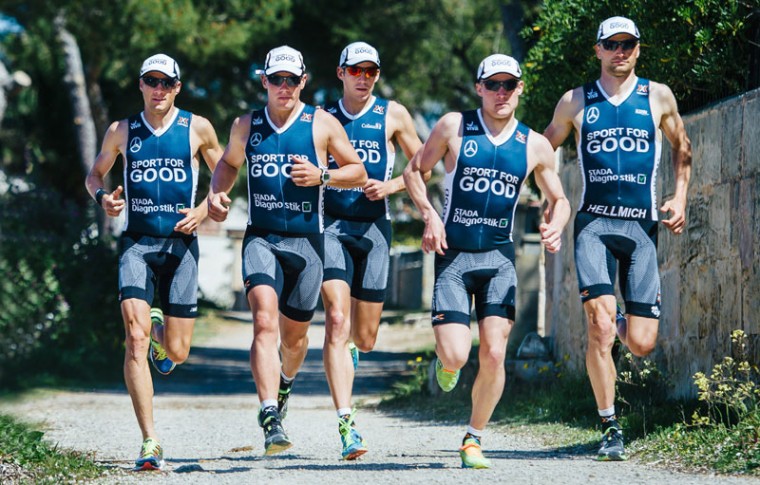 TEAM SPORT FOR GOOD – More than a professional triathlon team

The former Power Horse Triathlon Team has a new name: as TEAM SPORT FOR GOOD the triathlon team has joined the Laureus foundation, which supports disadvantaged children and teenagers with the help of the universal language of sports.

“We are proud to be the first professional triathlon team to give our name to the Laureus Sport for Good foundation,” said eight-time Ironman champion and three-time European long distance running champion Timo Bracht on the team’s relaunch. “We’re a professional team, so of course our focus is on taking part in as many races as possible at a high level. But we are also intent on shouldering our social responsibilities. We want to support the Laureus Mission because we have years of experience in the field of sport and know what a positive effect it has on society.”

“TEAM SPORT FOR GOOD’s approach could not have been possible without the support of our partners, so we would like to thank them again, this time officially,” added team manager Karsten Streng.

TEAM SPORT FOR GOOD will not only help spread the word of the foundation’s social commitment and projects among endurance athletes, but also plans to raise funds for the cause via special campaigns. “We and our partners would like to appeal to a wider audience of athletes and fans, to inspire them to support Laureus and become a member of TEAM SPORT FOR GOOD,“ said Karsten Streng, explaining the overall fundraising strategy. The first planned campaigns will be communicated during the following weeks.

“I’m thrilled to see that TEAM SPORT FOR GOOD, a whole team of top triathletes, has joined the Laureus movement, full of current or former world-class sportsmen and women, and that together they will be actively involved in the foundation’s good work all over the world,“ commented Paul Schif, CEO of the Laureus Sport for Good foundation.

The team, which has stayed almost the same since it was launched, made its first official appearance at a joint training session at partner hotel Viva Blue on Mallorca. Once again five athletes will be on the team this season. Four of them, 2014 Challenge Roth winner 2014 Bracht, double Ironman Champion Jan Raphael, Ironman Champion Sweden 2014 Horst Reichel, and the 2011 German long-distance triathlon champion Georg Potrebitsch, are team veterans approaching their fourth season. One change in the line-up brings in new blood: the current 70.3 age group European Ironman Champion U25 Julian Beuchert will replace Niclas Bock, who left the team to concentrate on personal career development. The team is glad at the opportunity to promote talented young athletes.

“I’m very excited and looking forward to learning from the experience and support of successful professionals and the team, and hope I can enhance my personal development based on that,“ says 22-year-old Julian Beuchert, who lives in close proximity to Timo Bracht. “For me the highlight of the season is the 70.3 age group Ironman world championship, which I will be preparing for with the help of my colleagues on the team.”

On behalf of all the athletes, Jan Raphael commented on the tried and trusted team line-up: “It’s great to see that we’ve managed to keep the team together again this year. We know we can rely on and profit from one another. That helps us put in our best performances year after year.”

The team’s sporting goals are the same as ever: podium positions at the important Ironman and Challenge races. Timo Bracht and Horst Reichel will be making their debut as athletes for TEAM SPORT FOR GOOD at the coming weekend, April 25th, at the Challenge Fuerteventura.

TEAM SPORT FOR GOOD will continue to be supported by their current partners, some of which have expanded their commitment to the team.

Mercedes-Benz is the team’s automotive partner and provides the athletes with new V-class vehicles as part of its support package. STADA AG contributes the brand and products of STADA Diagnostik. The team will also continue to profit from the support of helmet and eye protection technology innovators RUDY PROJECT, the world leader in the biking industry GIANT, X-technologies, with their highly innovative functional and compression clothing brands X-BIONIC and X-SOCKS, American cycle manufacturer ENVE, and American running shoe specialists Saucony.

New partners for TEAM SPORT FOR GOOD include the VIVA BLUE Hotel on Mallorca and ROTOR Bike Components. The athletes’ travel needs will also be supplied by EVOC.

For more information on the team and athletes, please visit: www.teamsportforgood.com.