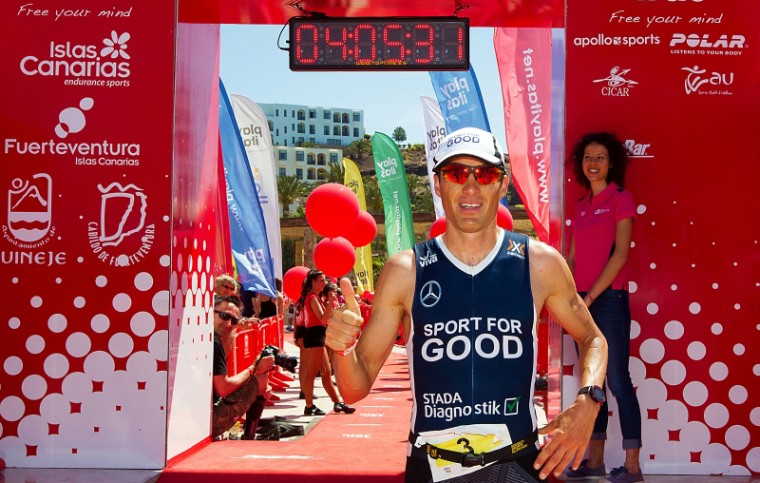 In his first race representing TEAM SPORT FOR GOOD Timo Bracht finished in fourth place. Unfortunately, his teammate Horst Reichel could not follow up on his excellent achievement from the previous year, ending the race in 12th position.
With ideal conditions and a strong international field, the swimming went right according to plan for both athletes. After an excellent swim, Bracht was the third athlete to start the 90k bike course, with Reichel immediately behind him in fourth place.
On the hilly course, Timo Bracht was the only athlete from the top group who tried to keep up the pace of the leading middle distance specialist and later winner of the day, the Italian Jonathan Ciavattella. In the end, he started the demanding running course in third position.
Horst Reichel, on the contrary, fell back to thirteenth position on the bike. "After a good swim I could not keep the pace of the top athletes on the bike. I was just not strong enough. I will have to analyse this and learn my lesson from it", a disappointed Reichel stated after the race.
After a solid half-marathon, Timo Bracht finished the race as best German in fourth position. His summary was positive: "Overall I was still lacking some speed. Yet it was a good swim, a good bike ride and a good run. It was not 'very good', but I still have a few weeks to catch that up. Being the first race of the season, I am right on target."
The two athletes of TEAM SPORT FOR GOOD will train for another two days on the island of Fuerteventura before travelling back to Germany.
On the next weekend (3rd of May), Georg Potrebitsch will be the next triathlete of TEAM SPORT FOR GOOD to start officially the season at the International Mallorca Triathlon.
​