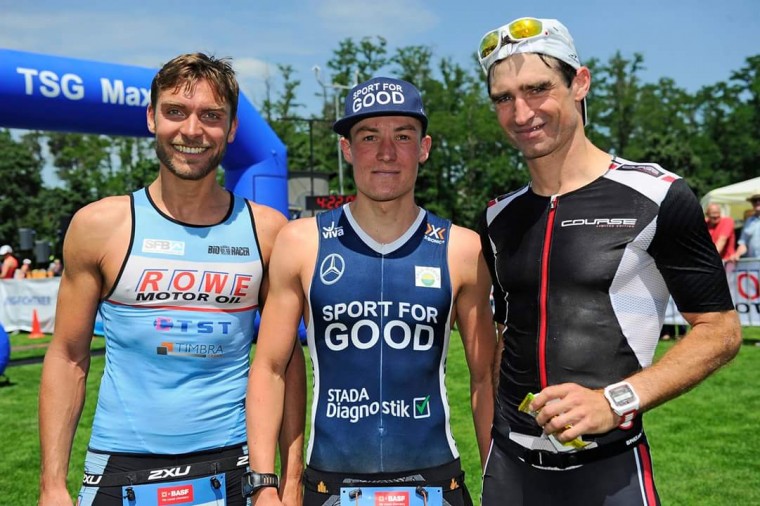 In the third race of BASF Triathlon-Cup Rhein-Neckar in Maxdorf, Julian surprised the favourites winning the middle distance race in 3:58:19 hours. Indeed, he was four minutes faster than Michael Göhner who won the race last year, but could not start this year due to injury.
"It was my first important race of the season and in fact only my second middle distance race. I am very happy with my result, although the last three kilometres were very hard," said the youngest athlete of TEAM SPORT FOR GOOD immediately after the race.
Julian Beuchert was in control of the race right from the beginning. After a less than perfect transition to the bike he was shortly in second place, but after 10 k found his pace and dominated the hard 85 k bike course regaining the lead. When reaching the second transition zone he had extended his lead to five minutes. Yet, for the 22 year old athlete from Mosbach the race could have taken a turn for the worse:
"After 60 kilometres I lost my water bottle, which was especially hard considering the hot temperatures. When lapping a slower athlete I asked him for a drink of water. Thank God he even gave me his entire bottle! Without that bottle I would have died of thirst. Many thanks again to the generous athlete who helped me out", commented Julian after this absolutely fair gesture.
Julian defended his lead successfully on the 20 k run although the last 3 k really made him suffer as he had begun the race with a frantic pace. In the end he won in style beating the favourites Michael März and Matthias Pfähler.
After his victory, the athlete of TEAM SPORT FOR GOOD will start his specific preparation for the 70.3 World Championship on August 30th 2015 in Zell am See. There, the reigning European champion of his age category is aspiring to achieve another top international result.