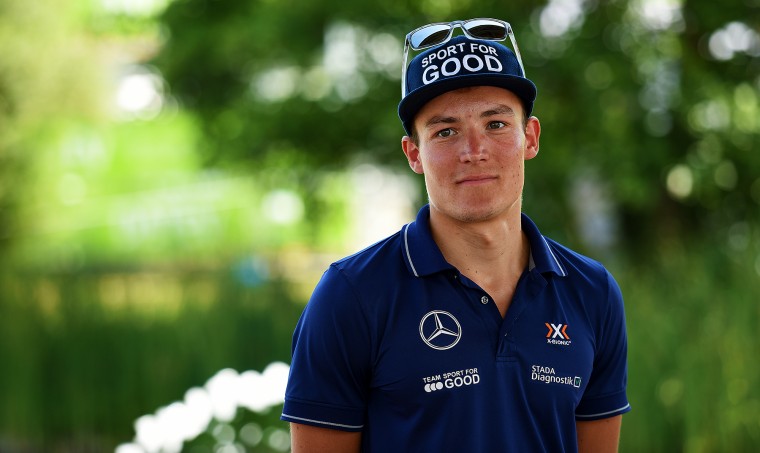 In his very first race at a World Championship, the young athlete from TEAM SPORT FOR GOOD launched his biggest coup. With an end time of 4:13:30 hours on half the Ironman distance, Julian Beuchert won the title in his 18-24 age group with the German Markus Rolli and the Italian Marco Dalla Venezia finishing second and third.

"I prepared myself all year for this World Championship. And now I can hardly believe that I won the title", the 23 year old athlete from Mosbach rejoiced. Timo Bracht, also, who watched the race from the side, was very impressed by the achievement of his young colleague: "Julian performed brilliantly. It was his first World Championship and he won the title in such an impressive manner. All this shows his great potential. The basis of his win was his cycling performance, which is due to the excellent training in his local Neckar-Odenwald district."
Indeed, Julian's performance on the bike was on par with the top professionals. With a time of 2:16:54 hours after 90 k he was just three minutes slower than defending champion Javier Gomez. With this world class performance on the bike, the 23 year old TEAM SPORT FOR GOOD athlete turned his deficit after the swim into a lead, breaking away from the rest of the field with Markus Rolli, who in the end finished second.

During the half marathon, Julian Beuchert managed to break away various times from his rival, yet lost some time again due to a cramp and later because of a stop and go penalty (supposedly his shirt was too wide open), so that Markus Rolli caught up with him again. "At 19 k I had a feeling that Markus had no reserves left. That's when I increased my pace and noticed he couldn't follow me."  Then, the athlete from Mosbach defended his advantage, celebrating after his win at the European Championship last year the biggest triumph yet of his career. "The run course at the lake with no shadow at all was extremely hard. But the great atmosphere and the fact that all my friends, relatives and my team colleague Timo Bracht were at the side of course cheering me on, pushed me a lot!"

Being asked about the importance of the title and his future plans, Julian Beuchert confessed: "Before the race I was absolutely sure that next year I would go on competing with the amateurs. After the race and winning the World Championship title, I'm not so sure any more …!"