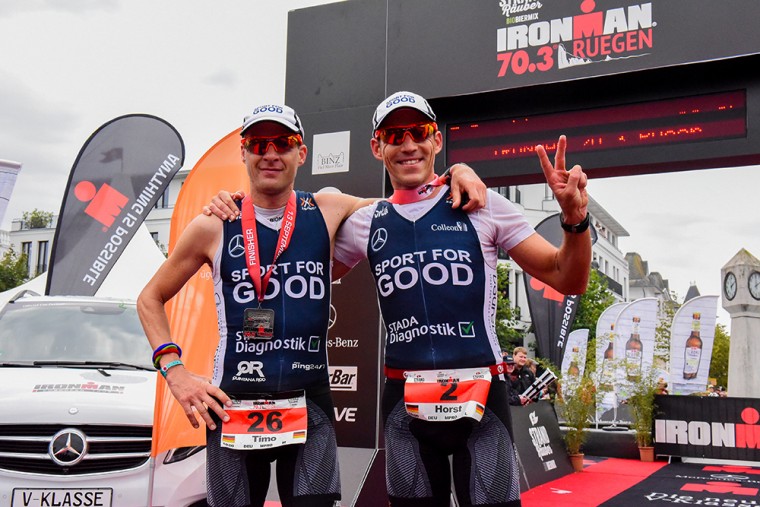 2nd and 3rd place for TEAM SPORT FOR GOOD at Ironman 70.3 Rügen

The two athletes of TEAM SPORT FOR GOOD Horst Reichel and Timo Bracht showed a strong performance at Ironman 70.3 Rügen finishing in second and third place. The only one to beat them was the two-time middle distance World Champion Michael Raelert.
"I am absolutely happy with my second place! After a rather mediocre season this result gives me a lot of confidence", the athlete from Darmstadt summed up his feelings after a successful race. His team colleague Timo Bracht was also very satisfied: "It was for sure one of my best performances in a middle distance race. Being on the podium with my team colleague Horst Reichel was great fun."

The 1.9 k swim in the Baltic Sea made life very difficult for the athletes. The sea was rough and Horst Reichel left the water one minute after Michael Raelert who was in the lead right from the beginning. When changing onto the bike, Timo Bracht found himself in the first chase pack round about position 7.

Also, the eight-time Ironman winner Timo Bracht showed a strong performance on the bike, reaching the transition zone in fifth place. After another quick transition he made up a few places already on the first two kilometres and was in third place 40 seconds down to Reichel when he began the last 19 kilometres of the run.

In the half marathon through the centre of Binz and along Schmachtner Lake both TEAM SPORT FOR GOOD athletes defended their positions in an impressive way and finished the race with the two fastest half marathon split times on second and third place in 3:54:55 and 3:56:07.
"As the run course with a total of four climbs at Klünder Berg was very demanding, I tried to run at constant speed without risking too much", the 33 year old athlete from Darmstadt assessed his good running performance.

Both athletes were not only happy about their performance but also very impressed by the event. "Rügen has done everything to organize a perfect race. It was great fun to compete here. The course and the atmosphere were phenomenal", Timo Bracht said enthusiastically after the race. "It was perfect publicity for triathlon in front of thousands of spectators."

Now, both TEAM SPORT FOR GOOD athletes begin their final preparation for the second big highlight of the season, Ironman Mallorca on September 26th, which they await with great anticipation.