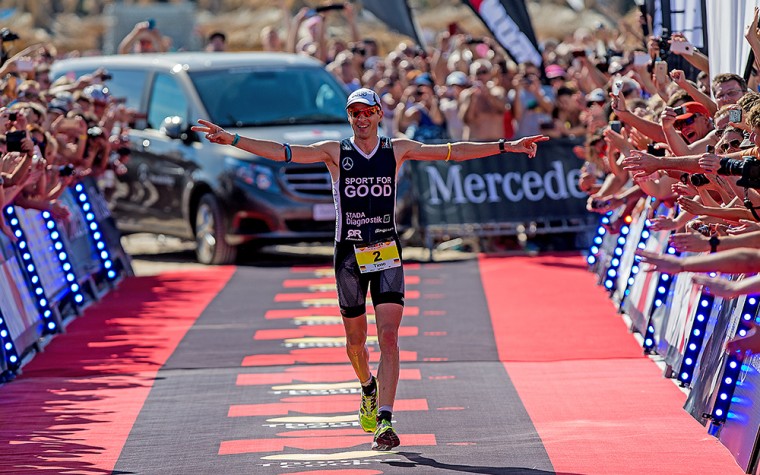 Timo Bracht won the Ironman Mallorca, setting a new course record in 8:17:22. In his ninth Ironman victory and tenth triumph in a long distance triathlon over all he really had to give it all. And so the spectators saw a thrilling fight for victory with the South African James Cunnama who in the end finished second.
"This victory really means a lot to me. From a purely competitive point of view it was definitely one of my best races. What really surprised me was my mental attitude and strength. I controlled the race all day long and was able to attack at the right moment", a jubilant Timo Bracht explained right after crossing the finish line.

Conditions were perfect in Alcudia Bay when the favourites with Timo Bracht, James Cunnama and Horst Reichel left the water after 50 minutes, round about one minute behind a leading pack of six athletes with last year's runner-up Miguel Fidalgo.

On the 180 kilometres of the bike section, Bracht stuck to his own rhythm, just as he had announced before the race, and did not try to catch up immediately with the leaders of the race. After 110 kilometres, the athlete of TEAM SPORT FOR GOOD launched a decisive attack on his way up to the Monastery of Lluc, closed the gap of four minutes to the leading bunch and was the first to start the descent. "On the ascent to the Monastery of Lluc and the winding descent I made use of my strengths and expanded my lead", he explained after the race. With the best bike split of the day (4:32:16) he increased his advantage of two minutes over James Cunnama.

After 15 kilometres on the run, however, the 40 year old athlete from Eberbach lost his lead to Cunnama, who in 2013 had finished fourth in Hawaii. On the first half of the marathon the South African converted his gap of two minutes to Bracht into a lead of 60 seconds. Yet Timo Bracht stuck to his pace, making use of his great experience. And indeed, nine kilometres before the end he overtook the 32 year old South African and increased his lead to two minutes at the finish line. Third in this highly competitive race was the winner of Ironman Lanzarote, the Italian Alessandro Degasperi.

Timo Bracht not only was impressed by his own achievement, but also by the event itself: "The race was perfectly organized. During the marathon I must have heard my name some 100,000 times. These are the moments that define triathlon and that motivate me to give my absolute best."

The second athlete of TEAM SPORT FOR GOOD, Horst Reichel, did not have his best day and had to give up the race after a good swim at 150 k on the bike. "My batteries were absolutely depleted and I did not want to walk the 42 kilometres", the disappointed athlete from Darmstadt explained after the race. "The problems I have had all year, showed up again today. My performances are fine as far as middle distance races are concerned, but longer races are for the time being too difficult to handle for me."