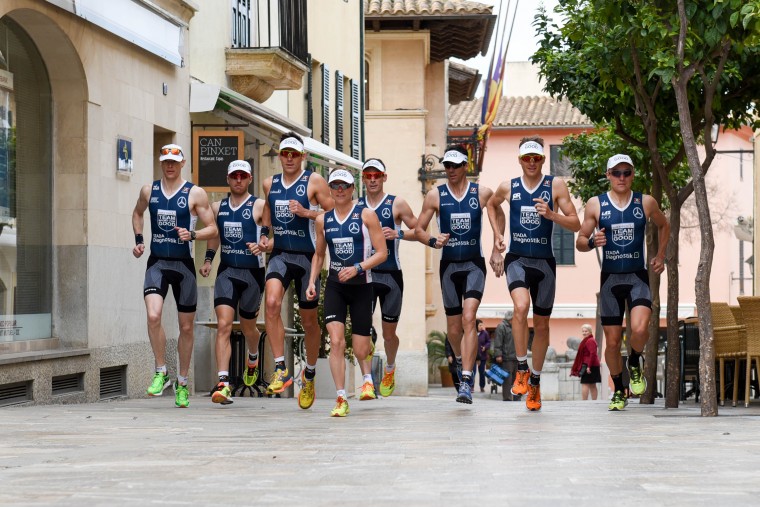 TEAM SPORT FOR GOOD has really reinforced the team for the upcoming triathlon season 2016. On the professional level, Timo Bracht, Horst Reichel and Julian Beuchert have been able to welcome to the team the two Finnish top athletes Kaisa Lehtonen and Darby Thomas. With them, the professional squad comprises again, just as in the previous years, 5 athletes after Georg Potrebitsch and Jan Raphael decided to pursue their own goals. Kaisa Lehtonen is, by the way, the first female member of TEAM SPORT FOR GOOD.

Timo Bracht, nine times Ironman champion and three times European Long Distance Champion is very happy about his new professional colleagues. "With Kaisa and Darby we have been able to attract to our team two international top athletes. They are a great addition to our team and also very impressive personalities."

The two new Finnish members will open the season on next Sunday, April 10th, for TEAM SPORT FOR GOOD at the Ironman in South Africa. Lehtonen is highly motivated. "I am very happy about my second Ironman. My preparation went well and that gives me a lot of self-confidence. I am keen to see how I will compete in this strong field."

In 2014, Kaisa Lehtonen changed from short to long distance triathlon. Last year with her win at the ETU Middle Distance European Championship in Rimini and her 3rd place at the ITU Long Distance World Championship in Motala she has proven that her decision was just right. At her Ironman debut 2015 in Barcelona, this outstanding Finnish athlete of 34 years achieved a sensational time of 8:48 hours. Lehtonen has shown that a lot can be expected from her also this season, when she finished Ironman 70.3 Dubai in third place, being beaten just by Daniela Ryf and Caroline Steffen. The nutritionist with a university degree is one of the fastest runners in the field which is due to her short distance background. In the last years Lehtonen has always been competing as an individual athlete and is now very happy to race as a member of a team. "It's only my second year in long distance racing and I hope to benefit a lot from the experience of my team members, above all from Timo. I am convinced that I will become an even stronger athlete with the team."

32 year old Darby Thomas is the 10 times Finnish triathlon champion and has already achieved many top 10 finishes at Ironman and Ironman 70.3 races. Before becoming a triathlete, Darby, born in the United States, was a successful cyclist. "Despite my past as a cyclist, my other strength nowadays is running, which is quite funny, as I never was a good runner as a child", Thomas says with a smile.

Besides the new professional athletes, there are also additions to the team on the age group level. At the presentation of the team in 2015, team manager Karsten Streng had indicated that in the future the team would not only comprise professional triathletes. Then, in October 2015, it was announced that the Spanish Mercedes-AMG DTM driver and ambitious age group triathlete Daniel Juncadella would be accompanied as new member of the team on his journey to the Ironman World Championship in Hawaii.

This newly initiated level of Team Ambassadors which - with the help of ambitious age group athletes - is to convey the Laureus concept of "Sport for Good" and also the work of the foundation of the team beyond the community of triathlon, will be complemented this year by two impressive personalities: Manuel Reuter, one of the most successful touring car drivers and two-times winner of the legendary 24 hours of Le Mans, will now wear the TEAM SPORT FOR GOOD suit in his triathlon races. Manuel Reuter is considered one of the best age groupers in triathlon, a fact demonstrated by him in 2012 at Ironman 70.3 Wiesbaden where he became European Champion in his age group.

Another new Team Ambassador is Mario Hentzel. He has been a passionate and successful triathlete with type 1 diabetes for many years now. He is a guide and coach of training groups and also works as a referee for the German Triathlon Union (DTU). Through his membership in the team, the police officer of 41 years will represent in a trustworthy manner the positive effect of the healthy sport triathlon, particularly in light of the growing number of diabetes patients, conveying the health claim "Sport for Good" with his know-how.

"We want to invite the community to join the team"

Just as in 2015, all the athletes of TEAM SPORT FOR GOOD will send out the Laureus message to the world and raise donations for the foundation. "The entire team but also individual athletes will promote through concrete actions the Laureus Foundation and support it financially. Moreover, for us, the concept of Team Sport for Good is also a concept embracing the community. Under the motto "Be Part of the Team" we will invite others this year too to become a part of the Laureus movement and of course of Team Sport for Good", Karsten Streng explained. "Athletes or fans that support us in this way will automatically become part of the third level of TEAM SPORT FOR GOOD, the so-called community level, benefiting amongst other things from promotions presented together with our partners."

TEAM SPORT FOR GOOD will count again on the support of the long-standing partners Mercedes-Benz, STADA AG, Rudy Project, X-BIONIC and of the suppliers Saucony, Evoc and the training resort partner Viva Hotels, who in part expanded their commitment. Team manager Karsten Streng is proud to have these strong partners: "We want to express our heartfelt thanks to our loyal partners. Without their support and the belief in our innovative team concept, TEAM SPORT FOR GOOD would not exist in this form."