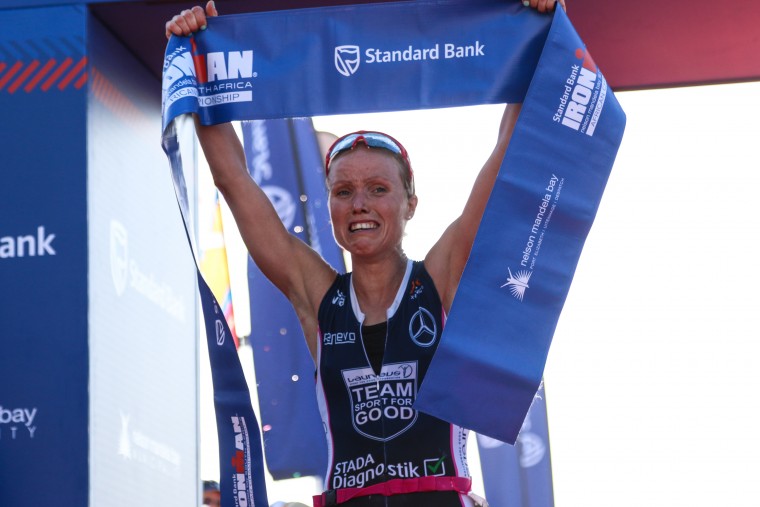 Although it was only her second Ironman distance race, the Finnish triathlete representing TEAM SPORT FOR GOOD wins Ironman South Africa with an impressive time of 9:06:50 h. After finishing second at Ironman Barcelona 2015, she has proved once again that changing from short to long distance was just the right decision. With her victory at the African Continental Championship, Kaisa has already secured qualification for the Ironman World Championship at Kona 2016.

"I am so happy to have won my first Ironman race. It is an incredible feeling. It is so cool! Right from the beginning it was a perfect race for me and to win against such strong competitors tops it off. Now I am looking very much forward to the Ironman Championship in Hawaii in October", a very happy and content Kaisa Lehtonen declared.

With perfect race conditions at Hobie Beach in Port Elizabeth, the TEAM SPORT FOR GOOD athlete left the water after 58:21 minutes in fifth place, just about six minutes after the fastest swimmer, Jodie-Ann Swallow. On the 180 k of the bike course, Lehtonen kept her calm despite of the constant changes of speed and positions of the leading bunch and raced just according to her plan. She even moved up one position to fourth place and returned after 4:59 hours to the transition area, some 12 minutes behind the race leader Annabel Luxford who had taken the lead after 100 k from Jodie Swallow who crashed with her bike.

Owing to her short distance past, Kaisa Lehtonen has an enormous running speed and she made use precisely of this strength on the marathon. Right from the first kilometre the Finn ran the fastest splits and made up time constantly on the leading Australian. The TEAM SPORT FOR GOOD athlete ran the first half marathon in an incredible time of 1:28 hours, some nine minutes faster than Luxford. At kilometre 25 the 34 year old Finn took the lead and increased it continuously to claim a sensational victory.

"I would like to thank Markus, my beloved super supporter, coach Paul Sjöholm and my new great team mates for their support. I am so happy to give the something back right with my first race", Kaisa commented after her biggest success to date.

The second TEAM SPORT FOR GOOD athlete Darby Thomas unfortunately had a really bad day that forced him to give up the race with stomach problems. "I am very frustrated, but cannot change it now. The stomach problems got worse during the race and I just had to drop out. Well, at least I could watch closely how Kaisa won the race."