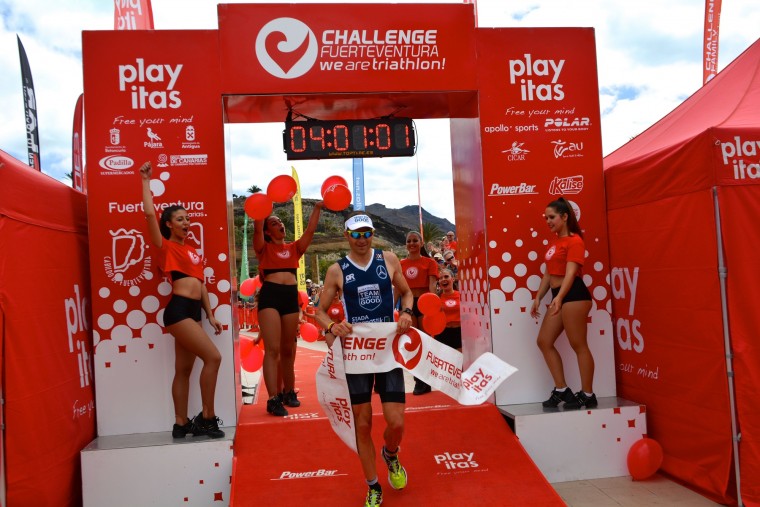 The season started for Timo Bracht at Challenge Fuerteventura with a third place. That is one position better than last year and shows that he is right on course for Ironman Lanzarote on May 21st.

At the beach of Las Playitas the professionals jumped into the waves of the Atlantic Ocean at 8.00 a.m. It took Bracht 21:53 minutes to finish the 1.9 k swim and he left the water just 40 seconds behind the fastest swimmer Fredrik van Lierde. "Right from the beginning it was a very fast swim. I managed to place myself with the leaders and secure a good position for the rest of the race", Bracht commented on the swim.

On the 90 k of the bike course the Team Sport for Good Athlete advanced after 38 kilometres to position five and stayed there. The Belgium Fredric van Lierde, crashed being in the lead on the bike on the last kilometres and had to abandon the race. Bracht who was just a few seconds behind him saw that terrible crash. He wishes him indeed a speedy recovery.

The triathlete from Eberbach, definitely a strong runner, started the 21.1 k run some three minutes behind the leading Danish athlete Henrik Hyldelund and 40 seconds behind Andi Böcherer, who at that moment was in third position.

Right from the first kilometre the long distance specialist ran a very constant pace, keeping his calm despite of constant changes of pace and of positions in front of him. Bracht's patience and experience paid off and on the last kilometres of the race he managed to overtake Andi Dreitz and Hyldelund to secure the last place on the podium.

After the race, the 40 year old athlete was very happy with his performance and is looking forward to the season. "After months of training the first race of the season is a little bit like a roller-coaster ride. I was right with the leading bunch during the entire race and got a place on the podium with a good strong finish. In two weeks, with Ironman Mallorca 70.3, the next test is up to be in perfect shape for the big race against Ironman World Champion Jan Frodeno at Ironman Lanzarote."

The German Andreas Böcherer won Challenge Fuerteventura in a time of 3:59:09, followed by the British athlete Will Clarke (3:59:35).