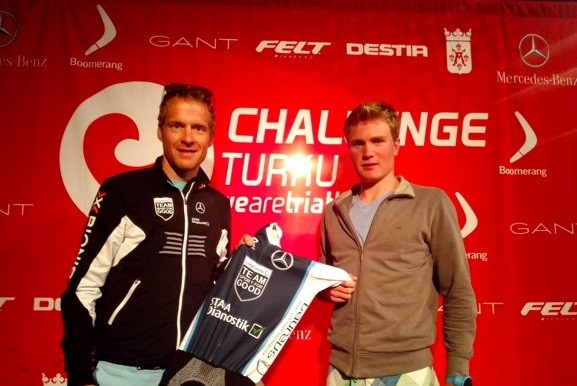 TEAM SPORT FOR GOOD expands its promotion of young talent

As of now, TEAM SPORT FOR GOOD is being reinforced by the young Finnish talent Henrik Goesch. The 22 year old will be another athlete with great perspective in the team. In the last two years, the team has already accompanied Julian Beuchert, the reigning Junior World and European champion, on his way to a professional career.

Henrik Goesch is an active triathlete since 2010, concentrating in the last years on sprint and Olympic distances. He has already been successful on international level with the Finnish national team. This year he was 29th at the ITU World Cup Race in Stockholm, second at the ETU European Cup in Estonia and sixth in Malmö. Last year, at the Turku Triathlon Weekend, he won the middle distance race, with Timo Bracht and Darby Thomas finishing in second and third place.

Timo Bracht was clearly pleased with his new team colleague. "Henrik is a very talented triathlete who has enormous speed on longer distances owing to his experience in short distance races. He may only be 22 years old, but he has already proved that he is not afraid of the big names in our sport, having already beaten some of them. I am convinced that he has still many successful years ahead of him and I am very happy to have him in the team."

"With Henrik we are definitely expanding our promotion of young talent. Julian Beuchert has developed in a very impressive way within our team in the last years and now we also want to help Henrik establish himself in the longer distances to pave his way for a successful professional career," Team Manager Karsten Streng added.

This coming weekend, Henrik Goesch will be at the starting line for the first time as a TEAM SPORT FOR GOOD athlete. Together with Timo Bracht and Darby Thomas the defending champion is among the favourites of Challenge Turku.

The big young talent was highly motivated before the race. "I am absolutely delighted to be able to race from now on for TEAM SPORT FOR GOOD. I am still very young and can learn a lot from my more experienced team mates. On Sunday I want to show with a top result that it was the right decision to include me in the team. If possible, of course, with another win."