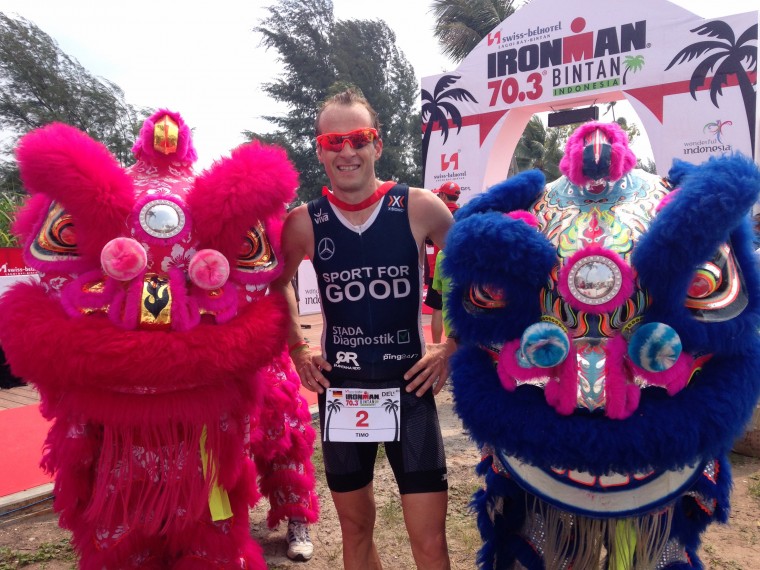 4th and 5th place for the TEAM SPORT FOR GOOD athletes

Yesterday's race day ended for Timo Bracht with a fourth place finish at Ironman 70.3 in Bintan (Indonesia), indeed his second middle distance race within just eight days. Jan Raphael took fifth place in his first long distance race after a long break due to injury at Ironman Copenhagen.
"The conditions for us Europeans are really very hard. I have experienced quite a lot in my career, but this tropical climate with clouds and heat and an extreme humidity has beaten it all. Already at five o'clock in the morning, when I went for a short run, I was sweating more than in other races during the entire run", an impressed Timo Bracht summed up his premiere at Ironman 70.3 Bintan in Indonesia.
The swim in the South China Sea went perfectly according to plans for the 40 year old athlete of TEAM SPORT FOR GOOD. Despite having raced another middle distance triathlon in Finland eight days before, Timo was able to give it all on the bike. After a hilly 90 kilometres through the jungle he started the run in second place. For a while he had even been in the lead of the race. During the run, the athlete from Eberbach was not able to defend this place, paying tribute to the very unfamiliar conditions for Europeans. In the end he finished in fourth place. "I did not want to risk anything considering these conditions, so I ran a regular marathon pace," Timo said after the race. Still, the TEAM SPORT FOR GOOD athlete drew a positive conclusion after his start at Ironman 70.3 Bintan: "The natives were so enthusiastic. They all left their huts and tents to cheer us on. This atmosphere and the children laughing on the roadside made the torture worthwhile."

Jan Raphael finished his first Ironman race after a long break due to injury in fifth place. At Ironman Copenhagen, the 35 year old athlete showed a solid swim and went on the bike course with the leading bunch. There, the TEAM SPORT FOR GOOD athlete had a few problems due to his lack of competition practice, losing a few minutes. At the beginning of the marathon Jan Raphael had the fastest splits. "I saw the chance to make up quite a few places with a strong marathon. In the first half things were looking good to make it even to second place, but then I just blew up. I have no idea why, because in fact I did not run too fast at the beginning. In the end I showed a disappointing performance not worthy of a fifth place", a disappointed and self-critical Jan Raphael summed up his race.

Both TEAM SPORT FOR GOOD athletes are now preparing intensively for their next Ironman long distance races at Mallorca and Barcelona. On their way, both will be at the starting line of Ironman 70.3 in Rügen (Germany).