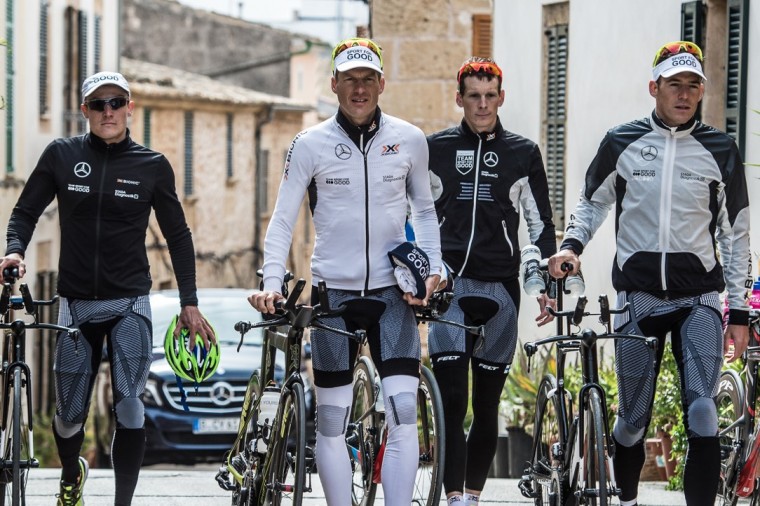 TEAM SPORT FOR GOOD on a squad mission

This coming weekend TEAM SPORT FOR GOOD athletes Timo Bracht, Horst Reichel, Darby Thomas and Julian Beuchert will participate in their first important races of the season. At Ironman Lanzarote, Bracht wants to secure his qualification for the Ironman Hawaii in October, whereas Reichel aims for a place on the podium at Ironman 70.3 Barcelona. Thomas and Beuchert want to show a solid performance in St. Pöten.

When on Saturday morning the 25th Ironman Lanzarote gets underway, there is only one goal for Timo Bracht. He will be aiming at his tenth Ironman victory and the renewed qualification for Ironman Hawaii. Despite winning Ironman Mallorca last year in September, Bracht needs at least another top three finish to secure definitely his place at the race on Big Island.

"I will be returning to the site of one of my biggest triumphs. In 2011 I won the race here in Lanzarote, setting a new course record. Now, of course, I want to repeat this success and I think I can make use of my experience. Another victory would be a dream come true! I know the island and the race course very well. I have been training there regularly for more than ten years. This year also I have been getting into perfect shape with quite a few 200 k bike rides and runs of up to 40 k. I am very well prepared for the race and the question mark of an obstinate cold seems to have been resolved", Timo Bracht describes his thoughts before the race.

Nonetheless, the 40 year old athlete will be facing fierce international competition. Apart from the Ironman World Champion of 2015, Jan Frodeno, other Ironman champions like Jesse Thomas, David Mc Namee, Ivan Raña and Stephen Bayliss will take their place at the starting line.

Still, Timo is convinced that it will be a hard race also for the other athletes.

"Unlike many other Ironman races, in Lanzarote you need an absolutely balanced performance. You have to pace yourself cleverly throughout the race, you must know your body perfectly and above all, you need a lot of self- confidence. All that suits me perfectly and that's why I am looking forward so much to a hot dance in the mountains of fire."

Even in his fourteenth year as a professional, Bracht prefers the biggest challenges.

"With strong winds and heat, Ironman Lanzarote can be a brutal beast that takes you apart if you are not able to resist it. Not only your physical abilities count, but also your will and dedication. If you love this sport like I do, then these are the races that make you even stronger. At the end of the day the strongest athlete will win. This is precisely my idea of triathlon."

The day after Timo Bracht's race in Lanzarote, Horst Reichel will compete at Ironman 70.3 Barcelona to fight for a place on the podium. After his third place finish at the recent race in Buschhütten he has gained a lot of confidence and momentum and is highly motivated.

"After Buschhütten I have had quite a lot of hard training sessions. Above all my swimming and running form is good and I will try to make use of it."

The winner of Ironman Sweden 2014 will meet many international middle and long distance specialists on the beach in Calella. Among them the winner of Ironman Lanzarote 2015 Alessandro Degasperi, Ritchie Nicholls, Matt Trautman, Bertrand Billard and the German Maurice Clavel.

"With some 50 professionals it is one of the biggest 70.3 races in Europe. As it is still quite early in the season, it is a good opportunity to gain some hard racing experience. The mountainous bike course is very challenging for the athletes and I will try to impress with a constant performance", the TEAM SPORT FOR GOOD athlete defines his goal.

Thomas and Beuchert will race the Ironman 70.3 St. Pölten in Austria and Thomas want to show a solid race after his DNF at Ironman South Africa earlier this year.

Our Youngster Julian Beuchert want to prove that he is the right Ironman 70.3 world champion with a strong race.