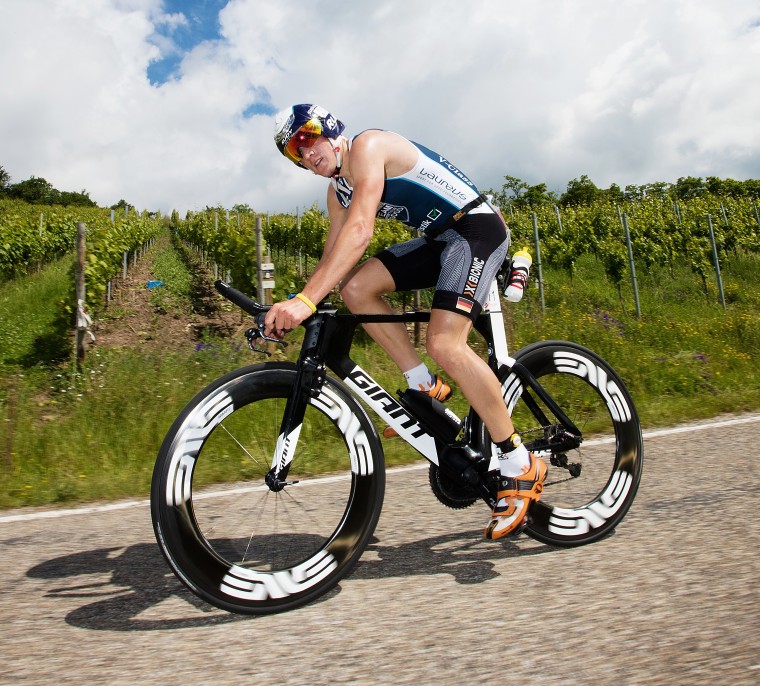 At the beginning of the season, young Julian Beuchert had set the triple as his big goal, wanting to become European and German Middle Distance Champion and also World Champion in long distance triathlon. He had already secured himself the first two titles and hoped to crown his season on Saturday. Preparations went very well and he was highly motivated to show a strong performance.

"Swimming was a big adventure. A lot of wind, many waves and in parts very shallow water. So there was no chance for a fast swim split and the 4 kilometres took me ten minutes more than I had expected. On the bike I was all on my own and rode consistently the watt values I had proposed myself. Still I had some problems with energy intake, so I started the run with some stomach aches."

Beuchert ran the first kilometres with a moderate pace hoping that his stomach would get better. This, unfortunately, was not the case and so he had to stop twice at the toilet. Yet all this would not hold him up in his chase for the World Championship. "Fortunately I was already more than 15 minutes ahead of the second athlete of my age group. So I ran home comfortably, securing another World Championship after winning the Ironman 70.3 title last year. It was a hard day, but I am very satisfied with my first long distance race", the TEAM SPORT FOR GOOD athlete summed up the race.

At Ironman Mallorca, Horst Reichel got off to a perfect start with a very fast swim and so he left the water together with the eventual race winner Carlos López Díaz more than three minutes ahead of the big first group. In the second discipline, Reichel opted for a more moderate pace to save valuable energy reserves considering that in the weeks before the race he had to fight with an infection.

The athlete from Darmstadt started the final marathon in fifth position. Up until the half marathon mark he ran a constant pace advancing to third place. For quite some time he looked certain to finish on the podium, yet five kilometres from the end he was completely exhausted and had to walk the last three kilometres to the finish line. That cost him a top ten place and in the end he had to content himself with a sixteenth place. "Of course I am sad that I lost a top position on the last kilometres. This goes to show that our sport does not forgive any weaknesses. Still I fought to the last metre and I am proud of it."

His team colleague Darby Thomas had a similar race. With a gap of almost eight minutes to the first big group after the swim he started the 180 k on the bike. Thanks to his constant and high pace he made up many positions.

"I felt really well on the bike and the first 30 kilometres of the marathon also went well. On the last 12 k though I had to fight with stomach problems that cost me a better position. Still, at the end of the day I am satisfied with my performance and highly motivated to compete in another long distance race at Ironman Cozumel", the Finnish athlete summed up his race.